After switching to Slic3r and doing some very basic configuration it failed at slicing the Mini Mr Jaws that went really wrong before. So instead I took the very similar Mini Mr Alligator and it sliced perfectly fine. It was with both excitement and some trepidation I pressed print… But it turned out to a close a complete success, the only bad thing was that I hadn’t saved the bed dimensions correctly in the Slic3r settings so the print got placed in the uppermost quadrant of the bed. Amazed at how well it turned out given the very minimal calibration!

The next print i tried was simply doubling the size, it also turned out well after issues with the first layer not sticking. Had to switch out the tape, then it worked fine. 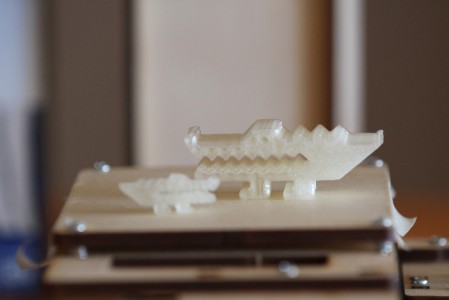 After these two successes I wanted to try something very different, and that also showed that a printer like this can’t just print smalll solid toys and similar. So I went to Thingiverse and grabbed a vase I’d liked earlier, one of the variants of the Kochflake vases. Tried different slicing settings to get rid of the top filled layer and chose a perimeter (wall thickness) of 2. This print took quite some time, almost 2 hours, and especially the height was very close to the maximum height available. The Z rods were at the end inside the top two linear bearings.

The print looks very nice. Had two issues, one was the first layer where the second half of the infill didn’t stick correctly and bunched up a bit. On the second layer that meant that the extruder nozzle bumped into them but it still went pretty good. The other problem is that you really can’t use the same (high) speed for the top layers. The instability of Jr when Z gets high means there’s plenty of layer misalignment problems for top centimeters.

I also have a very anoying and loud vibration issues with the X axis unfortunately, not sure what to do about it. 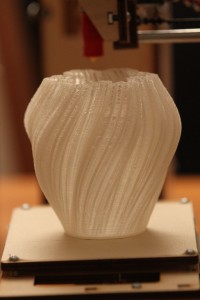 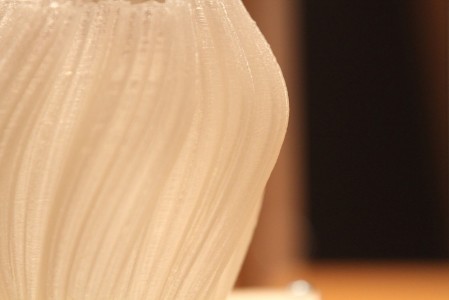 Closer look at the vase